Are You Making the Most of Your Workouts?

Hans Selye was a Hungarian doctor who did a lot of research on stress and the effect it has on various organisms in the first half of the 20th century. He is most known for his work on what he termed General Adaptation Syndrome (GAS). The basic premise is this: all organisms have a given resistance to stress. When a new stressor is introduced to that organism, there is an initial “alarm” phase where the organism’s stress resistance actually takes a hit and decreases, but then the organism starts to adapt to the stress and it becomes more resistant to that specific stress (i.e. the “resistance” phase). However, if the stress isn’t removed soon enough then the organism’s stress resistance will actually start to decline even to below its initial baseline stress resistance. This is called the “exhaustion” phase, for good reason. 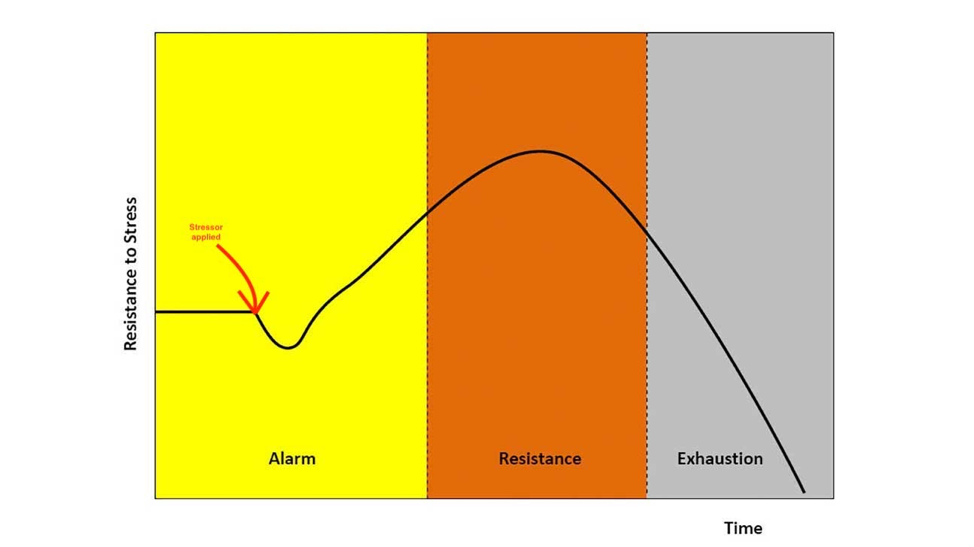 To help you better understand this theory, an obvious example of GAS in action (hehe) would be plants which, during periods of drought, send their roots deeper in order to absorb water at deeper soil levels. If the rain comes soon enough, the plant is no worse off and can better handle dry periods the next time they come around. But, if the drought continues, eventually the plant will die because no amount of adaptation can completely eliminate the plant’s need for water. Timing is everything in this process.

Now, how does this relate to us and fitness? Glad you asked.

Exercise is stress to us as humans. We tend to think of it as “good” stress because of the positive adaptations that result from it, but it’s still stress nonetheless and the principles of GAS apply to us as well. In the world of fitness, supercompensation is the term applied to how our bodies adapt to exercise and get fitter over time. Basically, it’s GAS in the exercise world. 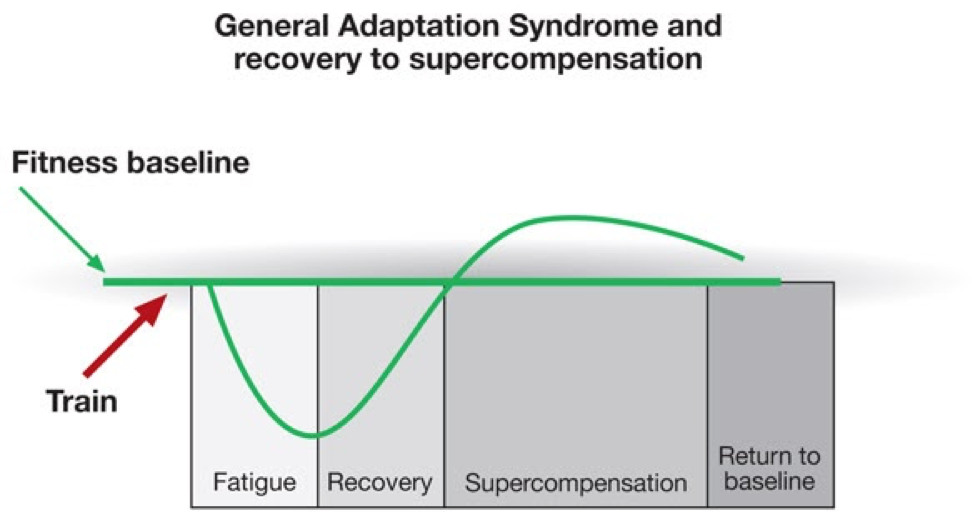 In short, when we put ourselves through a tough workout, we are immediately thereafter fatigued and in “worse” shape than we were before the workout began.

Wait, so working out makes us in worse shape then if we hadn’t worked out at all? Well, temporarily, yes.

Imagine doing a tough metcon, and then right after it ends, doing the same thing again. The second time through wouldn’t go as well, right? That’s because after that first metcon ends your body is in the alarm phase and due to a number of physiological reasons that don’t need mentioning here, you’re feeling more worn out, tired, less “in shape” than you were before the workout began (this is the “fatigue” phase in the image above).

Then, however, after several hours and maybe a day or two, your body starts to recover (recovery phase) and adaptations take place which makes you more resistant to the stress of a similar type of workout in the future. This is known as the period of supercompensation. Your body has over-compensated in order to better handle another hard workout and not die (literally…it’s all about survival when we get down to it). This is where the magic happens.

If another tough workout occurs during the supercompensation phase, as your body recovers it will “supercompensate” to an even higher fitness level. Continue to repeat this process over and over and that’s how really high levels of fitness are achieved. See the image below. 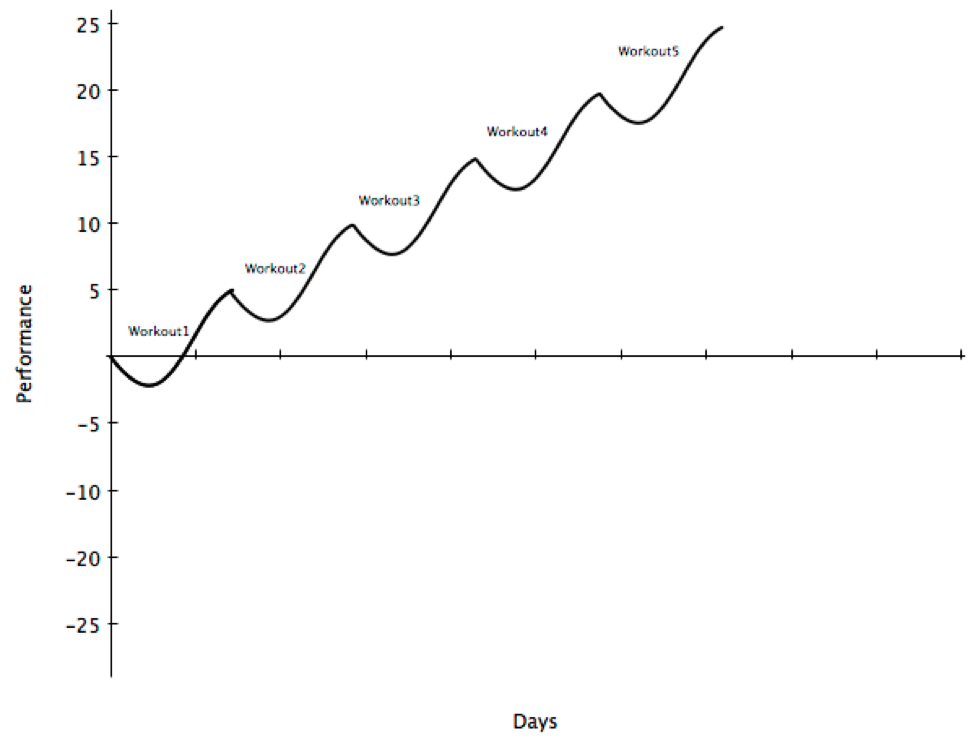 Timing is key in this process, however, and if we want to make steady progress in our fitness, we’ve got to get the timing right.

If the workouts are spaced optimally, right as we’re fully adapted from a given workout, we’ll hit ourselves with another workout and continue to repeat this process over and over until we’re as fit as we want (Graph A, below). 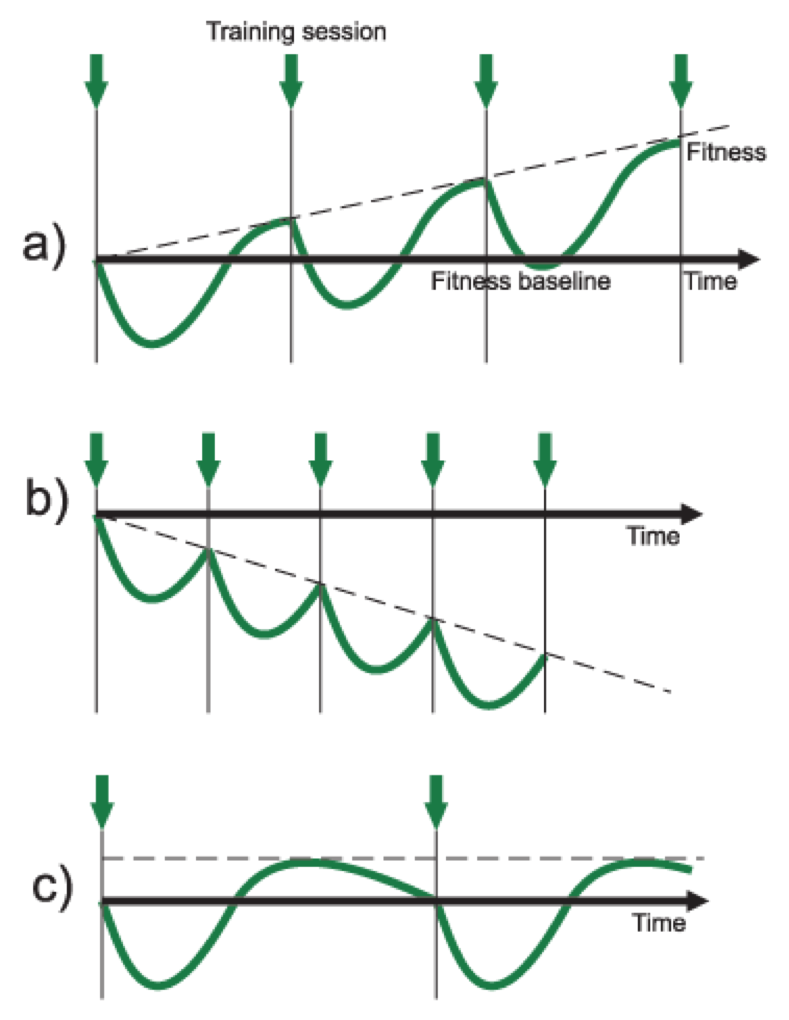 If however, the workouts are spaced too closely together and we’re not fully adapted (recovered) from a previous workout, then our fitness can decrease over time as the stress of working out is too frequent for our bodies to recover properly. Remember the plant that eventually dies if the drought lasts too long? It’s like that. We need time to recover and adapt. See Graph B above.

Conversely, if the workouts are spaced too far apart, by the time a subsequent workout occurs, our fitness has returned to baseline and no progress will be made. Adaptations to stress will eventually disappear if they’re not needed. This is what’s illustrated in Graph C above. If you workout today and then wait a month before you work out again, more than likely any positive adaptations that occurred after the first workout have disappeared by the time the second workout rolls around. No progress is made.

Which Graph Are You?

Now, I can’t tell you what’s too little or too much time between workouts in order to achieve that steady, upward-and-to-the-right fitness trendline that we’d like to achieve. There are too many variables to definitively say that. But I can help you figure it out for yourself.

Do you generally feel good, physically and mentally, about working out when you show up to the gym and are you making steady, even if it’s slow, progress? If so, keep doing what you’re doing. You’re probably an example of Graph A above.

However, are you noticing that your motivation toward the gym is lacking due to being worn-out, tired, overly sore, and as a result, you’re not able to put in the effort that you know you should be capable of? Has the term “burnout” crossed your mind lately? If so, you might be an example of Graph B and you might need to decrease the stress, that is, sleep more, eat better, decrease your workout frequency and/or intensity in an attempt to let your body actually recover. Maybe even take a week off and just rest (gasp!). I promise your “gainz” won’t vanish in only a week’s time, especially if you’ve been doing this fitness thing for a long time.

As a coach, I tend to see this happen in folks who have been working out with us for a while. They’ve made good progress, and they start to think that more fitnessing will bring even more results faster than before. If the thought of taking one or two days off from working out makes you uneasy, you might be developing the mindset that could lead you down the path of Graph B. You might tell yourself, “I’m gonna go easy today,” but then the workout begins and all bets are off. Men will die for points, right? As someone who has been there and done that, let me tell you: relax, take a step back, and rest. More isn’t better in this case.

Lastly, if you aren’t seeing the progress you would like to, but you’re not run down or overly tired from workouts either, then you might be a Graph C person. Take a look at your attendance in coming to the gym. Do you struggle to get here at least twice a week consistently (and that doesn’t mean four times one week and then none the next week either; steady, consistent attendance is what we’re looking for). You might need to make an effort to do so.

Similarly, maybe you come regularly but you never really push yourself when you are here. You don’t get too uncomfortable and you tend to just go through the motions. You probably don’t need to come more often, you just need to work harder when you are here. In your situation, the stress of exercising isn’t great enough to elicit any sort of positive adaptation from your body. Don’t be afraid to really push yourself. It’ll be ok.

That’s stress and adaptation in a nutshell for you. Too much stress, you die. Too little stress, nothing happens. But if you find just the right amount and frequency of stress to expose yourself too, you’ll get to enjoy your ride on the gainz-train for a long period of time.